THE AMAZON RAINFOREST THE LAST FRONTIER ON EARTH 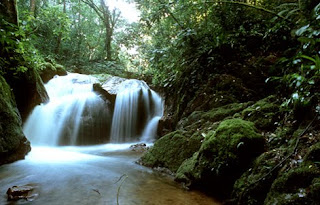 If Amazonian were a country, it would be the ninth largest in the world. The Amazon rain forest, the world's greatest remaining natural resource, is the most powerful and bio actively diverse natural phenomenon on the planet. It has been described as the "lungs of our planet" because it provides the essential service of continuously recycling carbon dioxide into oxygen. It is estimated that more than 20 percent of Earth's oxygen is produced in this area.
The Amazon covers more than 1.2 billion acres, representing two-fifths of the enormous South American continent, and is found in nine South American countries: Brazil, Colombia, Peru, Venezuela, Ecuador, Bolivia, Guyana, French Guiana, and Suriname. With 2.5 million square miles of rain forest, the Amazon rain forest represents 54 percent of the total rain forests left on Earth. 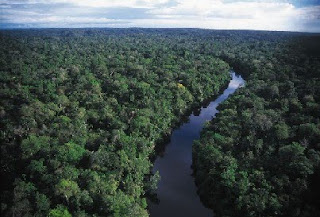 The life force of the Amazon rainforest is the mighty Amazon River. It starts as a trickle high in the snow-capped Andes Mountains and flows more than 4,000 miles across the South American continent until it enters the Atlantic Ocean at Belem, Brazil, where it is 200 to 300 miles across, depending on the season. Even 1,000 miles inland it is still 7 miles wide. The river is so deep that ocean liners can travel up its length to 2,300 miles inland. The Amazon River flows through the center of the rainforest and is fed by 1,100 tributaries, 17 of which are more than 1,000 miles long. The Amazon is by far the largest watershed and largest river system in the world occupying over 6 million square kilometers. Over two-thirds of all the fresh water found on Earth is in the Amazon Basin's rivers, streams, and tributaries.
With so much water it's not unusual that the main mode of transportation throughout the area is by boat. The smallest and most common boats used today are still made out of hollowed tree trunks, whether they are powered by outboard motors or more often by human-powered paddles. Almost 14,000 miles of Amazon waterway are navigable, and several million miles through swamps and forests are penetrable by canoe. The enormous Amazon River carries massive amounts of silt from runoff from the rainforest floor. Massive amounts of silt deposited at the mouth of the Amazon River has created the largest river island in the world-Marajo Island, which is roughly the size of Switzerland. With this massive freshwater system, it is not unusual that life beneath the water is as abundant and diverse as the surrounding rainforest's plant and animal species. More than 2,000 species of fish have been identified in the Amazon Basin - more species than in the entire Atlantic Ocean. 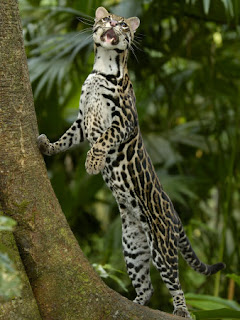 The Amazon Basin was formed in the Paleozoic period, somewhere between 500 million and 200 million years ago. The extreme age of the region in geologic terms has much to do with the relative infertility of the rainforest soil and the richness and unique diversity of the plant and animal life. There are more fertile areas in the Amazon River's flood plain, where the river deposits richer soil brought from the Andes, which only formed 20 million years ago.
The Amazon rainforest contains the largest collection of living plant and animal species in the world. The diversity of plant species in the Amazon rainforest is the highest on Earth. It is estimated that a single hectare (2.47 acres) of Amazon rainforest contains about 900 tons of living plants, including more than 750 types of trees and 1500 other plants. The Andean mountain range and the Amazon jungle are home to more than half of the world's species of flora and fauna; in fact, one in five of all the birds in the world live in the rainforests of the Amazon. To date, some 438,000 species of plants of economic and social interest have been registered in the region, and many more have yet to be catalogued or even discovered.

Scarring and Loss of Diversity 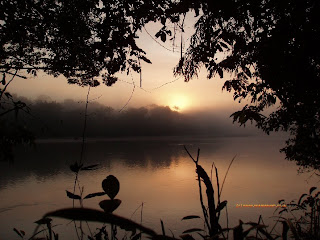 Once a vast sea of tropical forest, the Amazon rainforest today is scarred by roads, farms, ranches, and dams. Brazil is gifted with a full third of the world's remaining rainforests; unfortunately, it is also one of the world's great rainforest destroyers, burning or felling more than 2.7 million acres each year. More than 20 percent of rainforest in the Amazon has been razed and is gone forever. This ocean of green, nearly as large as Australia, is the last great rainforest in the known universe and it is being decimated like the others before it. Why? Like other rainforests already lost forever, the land is being cleared for logging timber, large-scale cattle ranching, mining operations, government road building and hydroelectric schemes, military operations, and the subsistence agriculture of peasants and landless settlers. Sadder still, in many places the rainforests are burnt simply to provide charcoal to power industrial plants in the area.
Posted by superranushka at 10:05 PM